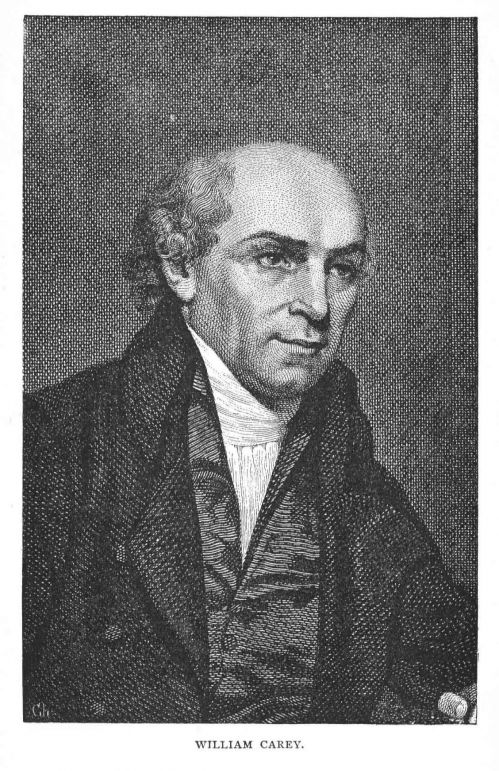 by Fred Barlow | Copied with permission from Profiles in Evangelism ©1976*

English Baptist missionary to India. Born in England in 1761. Pastor before going to the mission field, he spent an active forty-one years serving the Lord in India, including translating the Scriptures.

"Shoemaker by trade, but scholar, linguist and missionary by God's training," William Carey was one of God's giants in the history of evangelism! One of his biographers, F. Dealville Walker, wrote of Carey: "He, with a few contemporaries, was almost singlehanded in conquering the prevailing indifference and hostility to missionary effort; Carey developed a plan for missions, and printed his amazing Enquiry; he influenced timid and hesitating men to take steps to the evangelizing of the world." Another wrote of him, "Taking his life as a whole, it is not too much to say that he was the greatest and most versatile Christian missionary sent out in modern times."

Carey was born in a small thatched cottage in Paulerspury, a typical Northamptonshire village in England, August 17, 1761, of a weaver's family. When about eighteen he left the Church of England to "follow Christ" and to "...go forth unto Him without the camp, bearing His reproach." At first he joined the Congregational church at Hackleton where he was an apprentice shoemaker. It was there he married in 1781. And it was in Hackleton he began making five-mile walks to Olney in his quest for more spiritual truth. Olney was a stronghold of the Particular Baptists, the group that Carey cast his lot with after his baptism, October 5, 1783. Two years later he moved to Moulton to become a schoolmaster -- and a year later he became pastor of the small Baptist congregation there.

It was in Moulton that Carey heard the missionary call. In his own words he cried, "My attention to missions was first awakened after I was at Moulton, by reading the Last Voyage of Captain Cook." To many, Cook's Journal was a thrilling story of adventure, but to Carey it was a revelation of human need! He then began to read every book that had any bearing on the subject. (This, along with his language study -- for at twenty-one years of age Carey had mastered Latin, Greek, Hebrew and Italian, and was turning to Dutch and French. One well called his shoemaker's cottage "Carey's College," for as he cobbled shoes along with his preaching he never sat at his bench without some kind of a book before him.)

The more he read and studied, the more convinced he was "the peoples of the world need Christ." He read, he made notes, he made a great leather globe of the world and, one day, in the quietness of his cobbler's shop -- not in some enthusiastic missionary conference -- Carey heard the call: "If it be the duty of all men to believe the Gospel ... then it be the duty of those who are entrusted with the Gospel to endeavor to make it known among all nations." And Carey sobbed out, "Here am I; send me!"

To surrender was one thing -- to get to the field was quite another problem. There were no missionary societies and there was no real missionary interest. When Carey propounded this subject for discussion at a ministers' meeting, "Whether the command given to the apostles to teach all nations was not obligatory on all succeeding ministers to the end of the world, seeing that the accompanying promise was of equal extent," Dr. Ryland shouted, "Young man, sit down: when God pleases to covert the heathen, He will do it without your aid or mine." Andrew Fuller added his feelings as resembling the unbelieving captain of Israel, who said, "If the Lord should make windows in heaven, might such a thing be!"

But Carey persisted. he later said of his ministry, "I can plod!" And he was a man who "always resolutely determined never to give up on any point or particle of anything on which his mind was set until he had arrived at a clear knowledge of his subject."

Thus Carey wrote his famed “Enquiry Into the Obligations of the Christians to Use Means for the Conversion of the Heathen.” In this masterpiece on missions Carey answered arguments, surveyed the history of missions from apostolic times, surveyed the entire known world as to countries, size, population and religions, and dealt with the practical application of how to reach the world for Christ!

And he prayed. And he pled. And he plodded. And he persisted. And he preached -- especially his epoch-producing message, "EXPECT GREAT THINGS FROM GOD. ATTEMPT GREAT THINGS FOR GOD." The result of that message preached at Nottingham, May 30, 1792 -- and all the other missionary ministries of Carey -- produced the particular Baptist Missionary Society, formed that Fall at Kettering on October 2, 1792. A subscription was started and, ironically, Carey could not contribute any money toward it except the pledge of the profit from his book, The Enquiry.

It was in 1793 that Carey went to India. At first his wife was reluctant to go -- so Carey set off to go nevertheless, but after two returns from the docks to persuade her again, Dorothy and his children accompanied him. They arrived with a Dr. Thomas at the mouth of the Hooghly in India in November, 1793. There were years of discouragement (no Indian convert for seven years), debt, disease, deterioration of his wife's mind, death, but by the grace of God -- and by the power of the Word -- Carey continued and conquered for Christ!

When he died at 73 (1834), he had seen the Scriptures translated and printed into forty languages, he had been a college professor, and had founded a college at Serampore. He had seen India open its doors to missionaries, he had seen the edict passed prohibiting sati (burning widows on the funeral pyres of their dead husbands), and he had seen converts for Christ.

On his deathbed Carey called out to a missionary friend, "Dr. Duff! You have been speaking about Dr. Carey; when I am gone, say nothing about Dr. Carey -- speak about Dr. Carey's God." That charge was symbolic of Carey, considered by many to be a "unique figure, towering above both contemporaries and successors" in the ministry of missions.

Used with permission by Stephen Ross for WholesomeWords.org from Profiles in Evangelism by Fred Barlow, Sword of the Lord Publishers, ©1976.